In the recent years, the production of well-designed rail vehicles has been developing 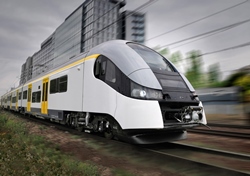 dynamically in Poland, with the Bydgoszcz producer PESA SA being the unchallenged leader. The renowned designer Bartosz Piotrowski is the man behind Poland’s such fast catching up with the world leaders in the field. The author of many successfully implemented and marketed products will be joined in the debate by Jacek Konop, the development expert at PESA Bydgoszcz SA, who works closely with Piotrowski. Together, we’ll all try to predict the future of the rail vehicles industry and define the role that design plays in the field. We will also be discussing the quality of Polish railways and why they are in the deplorable state that they are in as well as try to define what steps should be taken to amend the existing situation.

Bartosz Piotrowski (b. 1973) – During 1994–1998 he studied at the Faculty of Industrial Design at the Academy of Fine Arts in Warsaw. In 2006, he graduated from the Faculty of Architecture and Industrial Design at the Academy of Fine Arts in Gdańsk, where he obtained his PhD in 2010. Since 2005, holding a post at PESA Bydgoszcz SA, where he is the Manager of the Industrial Design Section in the Department of R&D. He has created more than a dozen designs of rail vehicles. Since 2010, he has lectured at the Faculty of Mechanical Engineering of the University of Technology and Life Sciences in Bydgoszcz. Jointly with Kamila Kamińska, he runs the Design Project Studio (www.circle.com.pl).

Jacek Konop (b. 1967) –  a designer, technologist and constructor of rail vehicles, member of the Section of the Methods of Experimental Mechanics of the Mechanics Committee at the Polish Academy of Sciences PAN. He has held posts as technologist at ZNTK Bydgoszcz SA, INPLAST GTZ and PESA Bydgoszcz SA. During 2005–2006 co-founded the Foot-Print Project EUREKA project team and from 2007 until 2011, he was the deputy head of project working on the vehicles DMU ATR 220 and EMU ELF at PESA Bydgoszcz SA, where since 2010 he has been in charge of the R&D Section.