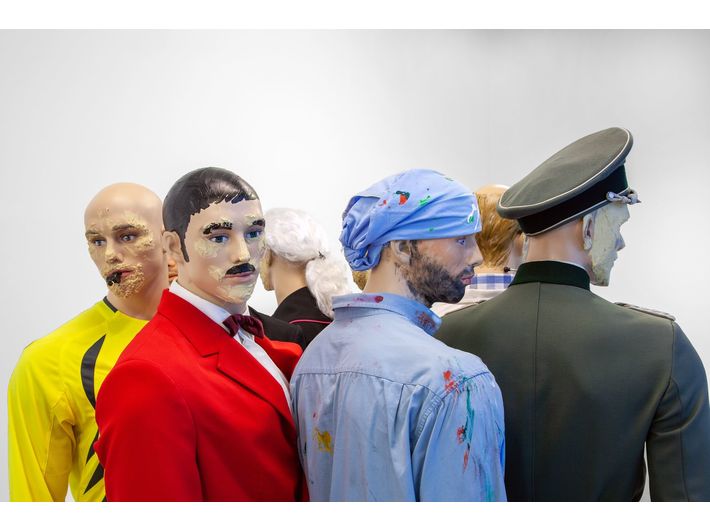 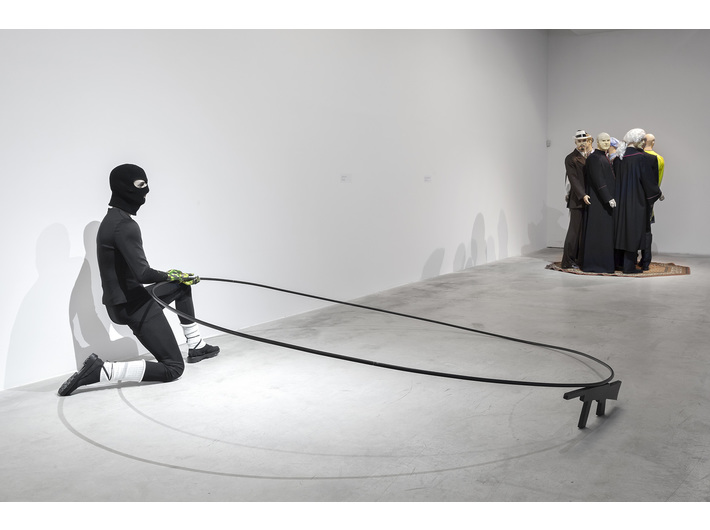 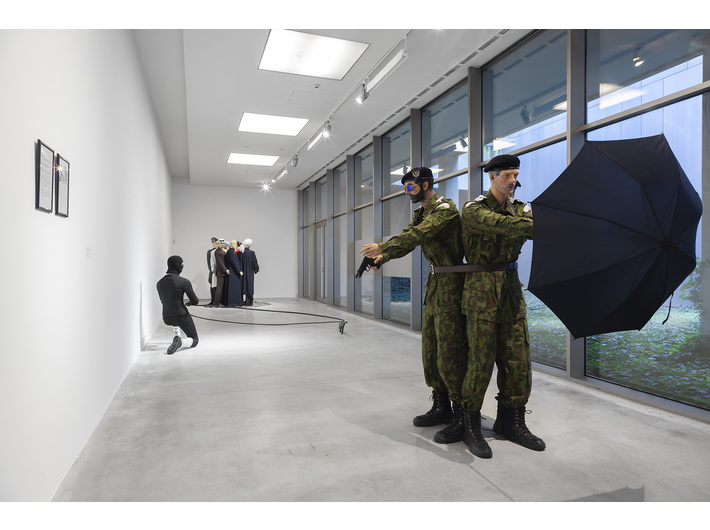 At the exhibition we present three installations: Ian Ross Baughman’s Multi-Equation Case Model, Revitalisation of Jacek Malczewski’s ‘Vicious Circle’ (MOCAK Collection) and Le danse macabre de terrorisme. The most important element in the works of Marcin Berdyszak is the human figure, contextualised by means of clothing, positioning, props and surroundings. The connections between the first two works are constructed by employing mannequins that feature in both works. The subject of the third work is the dialogue that a human being – a terrorist – embarks on with the object.

The Multi-Equation Case Model… is a group of almost identical figures, equipped with different props. The starting point for this installation was a photograph taken during the civil war in Rhodesia by an American photojournalist and a text by Jan Kosidowski on ethics in that profession. The responsibility for a war crime lies not only with those who reach for the weapon, but also with those who conceal facts or manipulate photographic records.

Revitalisation of Jacek Malczewski’s ‘Vicious Circle’ is a set of characters in different positions, professions and functions in their lives. What makes us different is not humanity, but the context of our lives. In this instance, physical proximity has a negative dimension: the people presented are strangers to each other, but reality forces them to take their place in a shared space. The deliberate and ostentatious reference to the Malczewski painting implies or indeed crystallises the message that we live in a system of artificially generated differences. We have become differentiated to the point that it has generated a kind of social madness.

Le danse macabre de terrorisme shows a symbolic relation between the man and the weapon, conjoined in a fatal entanglement. The time has not yet come for the precariously poised human figure to deploy the gun; the circumference implies an interval of time before the decision is decision, yet the menacing pose suggests the inevitability of the act.

The works of Marcin Berdyszak are tinged with existential unease about human fate being predetermined by our position in time and place as well as our station in life; we remain imprisoned in a vicious circle of which we are not entirely aware and that we cannot quite control.

The exhibition is part of the individual presentations of artists from the MOCAK Collection.

Marcin Berdyszak (b. 1964) – sculpture, installation, object, multimedia. He creates spatial installations and performative actions. Intrigued by the parameters of place and space, he has organised large scale site-specific actions. His works take up an open dialogue with artists such as Jacek Malczewski, Tadeusz Kantor, Joseph Beuys, Marcel Duchamp, René Magritte, Jasper Johns, as well as the artist’s father, Jan Berdyszak. He meticulously reprocesses motifs familiar from art history, opening up new potential for re-interpretation. He builds installations from fruit and readymade objects such as mannequins. For the latter, he creates contexts that involve designing makeup and costumes. As a result his installations become homogenous, with elements blending to the point of invisibility, thus losing their original meaning.

Marcin Berdyszak graduated in painting and sculpture from the State Higher School of Fine Arts in Poznań (now the University of Arts) in 1988. Since 1989 he has held a post at his alma mater, currently as a professor, running the Studio of Spatial Activities at the Faculty of Sculpture. Together with Tadeusz Wieczorek, Piotr Pawlak and Wojciech Nowak he co-founded Magazyn, the journal of the Artistic and Educational Association. He has conducted several dozen artistic workshops in Poland and abroad.