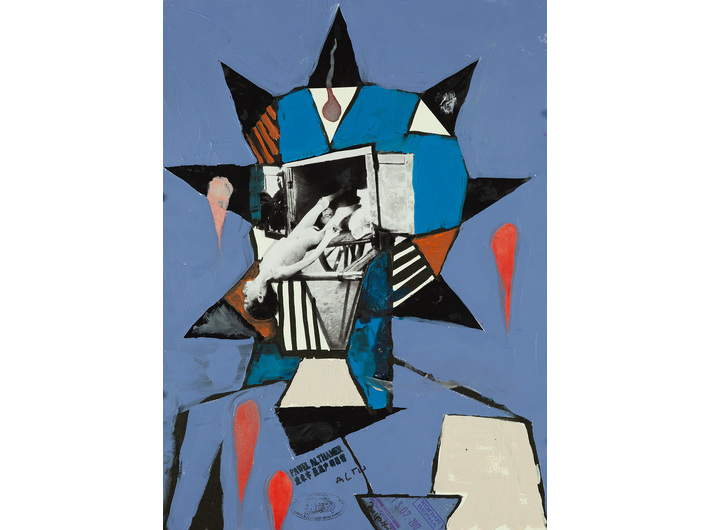 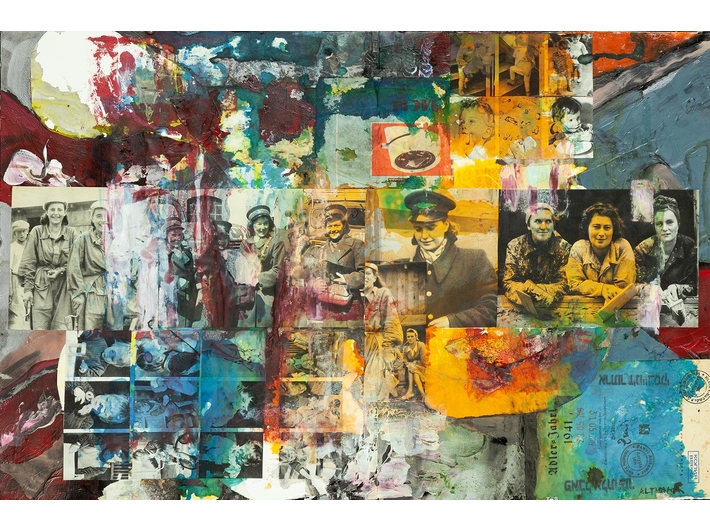 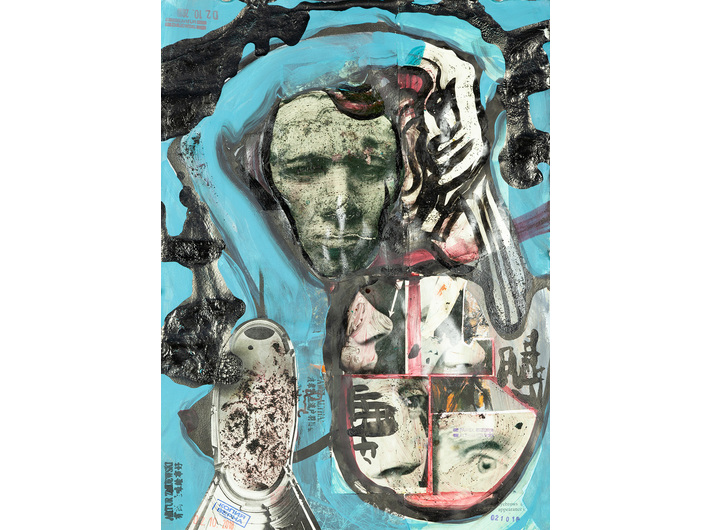 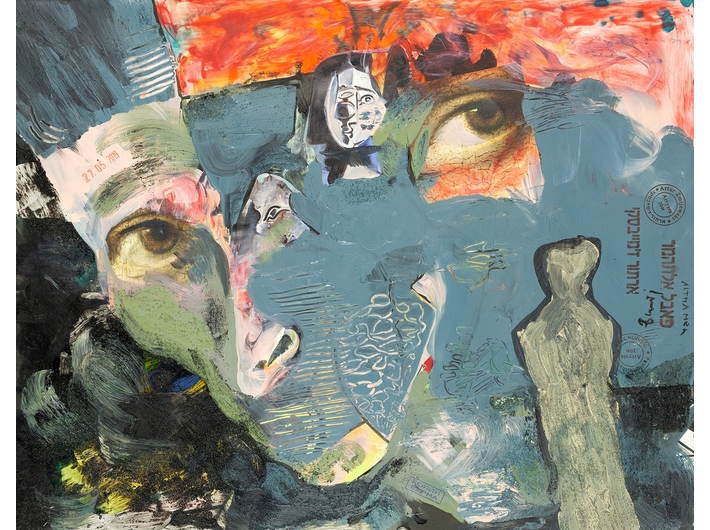 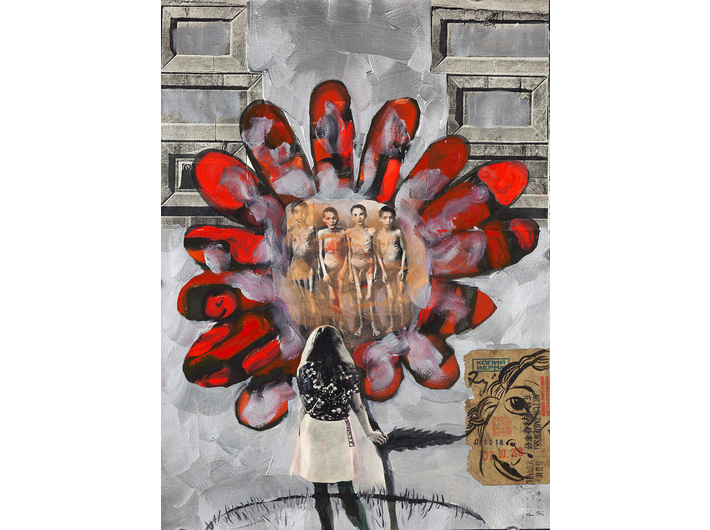 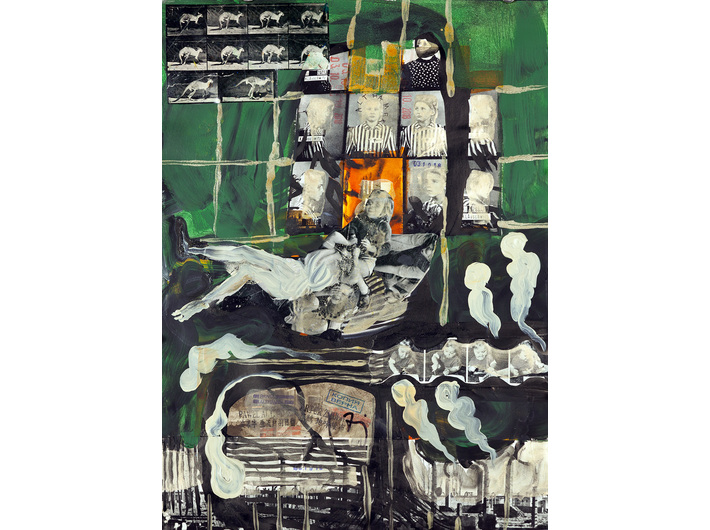 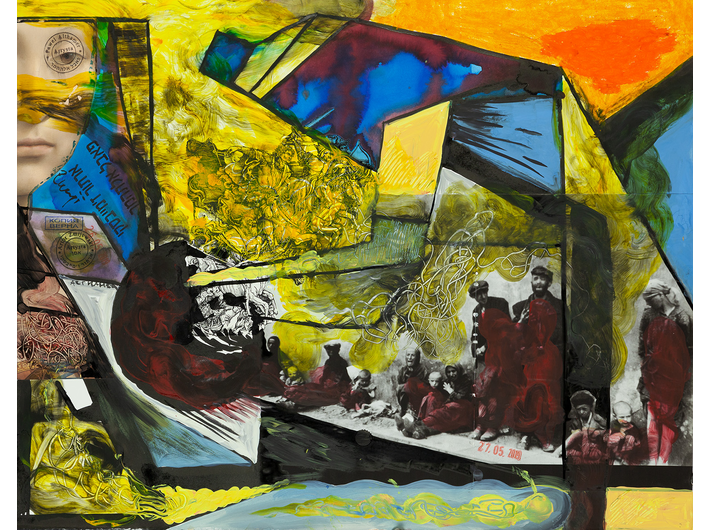 At the exhibition The Ultimate Song by Paweł Althamer and Artur Żmijewski we present a selection of 20 collages created between 2017 and 2019.

The artists, both graduates of Grzegorz Kowalski’s studio and dedicated to Oskar Hansen’s concept of the Open Form, debuted in the 1990s. They have been part of the canon of Polish and world art ever since. They have kept in touch with each other after graduation from the Academy of Fine Arts in Warsaw, and they remain friends, working together and presenting joint exhibitions. During their shared residence in Japan, they started a series of works on paper, using ink and stamps, and in 2017 they began to create collages, referencing works of poetry. The poets they find inspirational include Czesław and Oskar Miłosz, Paul Celan, Stanisław Grochowiak, and Rafał Wojaczek. The collages are made of excerpts cut out from books – starting with Taschen’s erotic and pornographic publications, through nature and anatomical albums, to historical and scientific atlases. The multi-layered, painterly works have a clear texture, colour and dense composition. War, the Shoah, suffering and erotica are some of the themes that appear in the exhibition, with no particular emphasis on any single one. There is an absence of politics – the topic that the audiences have grown accustomed to following the artists in their years of strife in the field of criticism.  Nor are there exhortations to rise up or eulogies of the revolution. Instead, there is a reflection on poetry and art.

The artists selected the poems to be included in the accompanying publication, which is available in two versions: in Polish and in English.

Sculpture, performance, installation, video.
His work is diverse both in terms of the media used, and form. He creates sculptural self-portraits, appears in performances and video, endeavouring to experience the materiality of the body and define his own mental boundaries. Through actions in which he engages entire communities, he wants to create social communalities, confronting people with each other through art. He questions the significance of monumental monuments by the scale of his works and the randomness of his materials.

Photography, film, video.
He postulates aware participation of art in social life. In his works he exposes the world of the ‘others’, who often pass unnoticed. He records their everyday life, showing how physical and mental limitations condemn these people to be marginalised in society. Through experiments with the participation of selected groups, he seeks to understand difficult experiences and taboo subjects.

The project co-financed from the funds of Krakow City Council

As a part of Open Eyes Festival