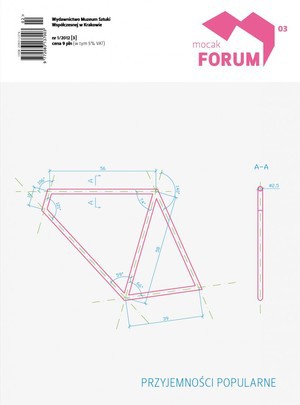 Popular Pleasures
Popular screen culture and childhood Dafna Lemish
Post-Feminism and Beyond Angela Mcrobbie
elite Bodies, popular Bodies Women's Tennis in the Cultural Studies Perspective Michal Gulik
Popular Culture Joke Hermes
So bad, it's good. The Paradoxe of judgment in Culture Kaja Klimek
Introduction
Popular Culture of Creative Insubordination Samuel Nowak
Interviews
The open Gallery Anna Maria Potocka and Rafal Bujnowski talk about art on billboards
Popular is political Richard Dyer talks to Samuel Nowak about popular culture, university and politics
Passive/Active Katarzyna Wincenciak and Iwona Wojnarowicz talk with Miroslaw Filiciak about culture 2.0 and the promise of new media
I don’t know that much about pop culture Julita Kwasniak and Katarzyna Was talk about the relationship between pop culture and art with Anda Rottenberg
Visual Essay
Utopias among us Anna Taszycka’s commentary to Laura Pawela’s visual essay
Texts
Szapocznikow opining her Eyes to the real World Agata Jakubowska
Exploding the Frame of the Reality TV Zone Travis Jeppesen
Criticism 2.0 Adam Kruk
Essay
Why I do not like pop culture Mike Urbaniak
Why I like Pop Culture Joanna Pawluskiewicz
Edu Lab
Ambiguous stories Elzbieta Sala
responsable or entangled? Elzbieta Sala
Andy Warhol for the Little Ones Iwona Wojnarowicz
Reviews
In a dream World Sebastian Frackiewicz
In order to understand, you need to know the Context Lukasz Gazur
At MOCAK
There Is Nothing for Me Here: Why Are Women’s Museums Created? Elzbieta Sala
Through the Looking-Glass. On searching the trail and reading from fragments of the Smoczynski Archive Anna Sulich-Liga
Overview
Overviews

There are several narrations when it comes to popular culture. The first one promotes the notion of mass culture and uses a highly critical language inherited from the Frankfurt school. It disparages almost all popular artefacts and texts. Pop culture, as opposed to art, is viewed as manipulation and slander, an anti-democratic force which enslaves the Western mind and starts colonising more and more areas within the global village. You prefer The Bold and the Beautiful to a new performance by Sarah Kane? Then you are done for; you have fallen into the pop-cultural trap. The second narration is more neutral; pop culture has both positive and negative aspects. It is hard to say what is worse: the furious attacks on the culture industry or the watered-down ambivalence. However, there is one more, newer version of this story, which admits that popular culture indeed used to lack in quality but today we are witnessing a rebirth in mass entertainment. This claim is usually supported by the example of TV series connected with the phenomenon of the so-called quality TV. Is there even one person left who did not watch at least one episode of Desperate Housewives, Lost or Ally McBeal? Well, we still have to say that none of these three narrations is adequate. Why? This is the main topic of this issue of ‘MOCAK Forum’.