Christoph Schäfer draws a panorama, fragmented by trenches, full with things and words. Blue letters run over the horizon “HOW TO GET HOLD ON THE SLIPPERY TERRAIN OF A DEREGULATED SOCIETY. SPATIALIZED CONFLICTS” and below: “RIGHT TO THE CITY” and “CONNECT URBAN STRUGGLES” might provide the answer. All of these slogans refer to the thinking of Henri Lefebvre, who suggested in 1972, that the interesting struggles for liberation and equality would happen in urban space, not in the factories.

On the right, we can see the schematic plan of Istanbul and the names of neighbourhoods that are subject to demolition undertaken in the name of gentrification of the city, like Sulukule and Tarlabasi. The residents engaged in a battle with the police, triggered by the felling of the trees in the public Gezi Park in 2013. It was the largest protest movement in Turkish history. The everyday life items like mobile phones, pots, pans, alcohol bottles were turned by the inhabitants of Istanbul into instruments of resistance during the Gezi-Taksim protests.

At the other end, the drawing shows Hamburg. Again we see the names of areas of resistance against gentrification. Hamburg has a strong the Right to the City (Recht auf Stadt) movement, which opposed urban projects that were to involve evictions in the affected communities. At the turn of 2013 and 2014, the residents joined forces with the left-wing politicised FC St. Pauli football fans, the anarchist Rote Flora and local artists. We can find here “protest tools” like megafones used by All-Women Megafon-Choir, as well as toilet brushes – symbol of the successful protest against the right of the police to stop and search people in the areas called “Danger Zones”. The solidarity of such different social groups augurs a global coalition of diverse forces in the struggle for people’s right to urban space. 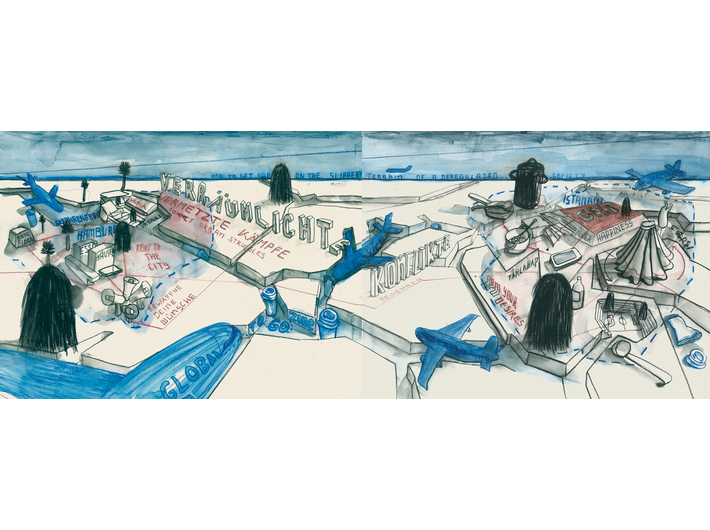