The starting point for the composition is the View of Vienna (1847) by Jakob Alt. If the city were to find itself by the sea, the dreams of most of its inhabitants would come true. The balloons stand for our fantasy of being able to fly and achieve a sense of freedom. On the roofs of the city apartment blocks, the members of the research project Isola Utopia are waving their flags. The partly obscured inscriptions on the banners symbolise the as-yet unrealised utopias. Their blue hue represents an allusion to Ernst Bloch’s call, in his Spirit of Utopia, to ‘build ourselves into the blue’.

The banner, composed in the form of a collage, contains a number of visual quotations. The silhouettes of naked dancers are derived from the painting The Golden Age (1530) by Lucas Cranach the Elder. The artist has also borrowed the silhouette of the Russian composer Arseny Avraamov from the photograph showing him conducting the Symphony of Factory Sirens in Baku in 1922. On the right, we find the banner proclaiming ‘Anti Capitalista’ – in lettering familiar from the Coca-Cola logo – from the demonstration in the Gezi Park in Istanbul in 2013, whereas the black-and-red banner was inspired by the general strike in Guadeloupe in 2009. On the roof of the cathedral, we can see the Republic of the Rose Island, a short-lived independent microstate, that consisted of a platform built on the Adriatic but was soon destroyed by Italian Navy. 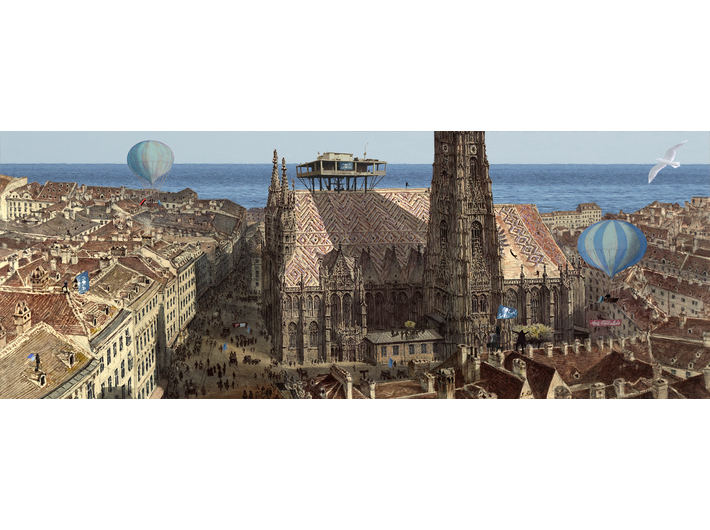