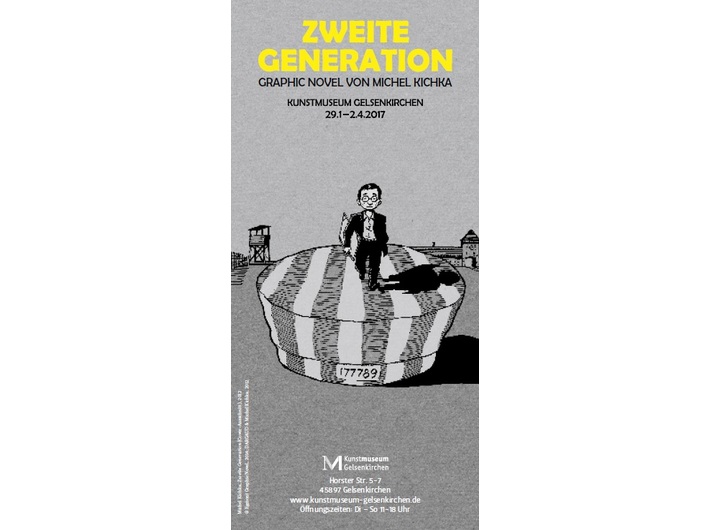 The exhibition is part of the programme accompanying the premiere of the opera The Passenger, based on the novel by Zofia Posmysz, at the Musiktheater im Revier in Gelsenkirchen.

In his book Second Generation, Michel Kichka recalls his relationship with his father Henri (born in 1926, in 1942 he was sent to Auschwitz, where he remained for 31 months), who was the only member of the family to have survived the Holocaust. The narrative, conducted from the son’s point of view, shows that the father’s experiences in Auschwitz and in other concentration camps had a significant impact on both the lives of individual family members and many aspects of family life such as the upbringing of children, communal eating and the celebration of festivities.

Michel Kichka is one of the most prominent Israeli caricature and comics artists. He was born in Belgium in 1954, and, at the age of 20, emigrated to Israel. He is the professor at the Bezalel Academy of Arts and Design in Jerusalem and works closely with international media, including CNN, Courrier international and International Herald Tribune. He is also a member of the organisation Cartooning for Peace.

In the Kunstmuseum Gelsenkirchen, Kichka will present his original drawings for the first edition of the graphic novel Second Generation. The Things I Didn’t Tell My Father, published in France in 2012. They will be accompanied by short film sequences shot in Belgium, Israel and Poland: conversations between father and the son about the time before and after the war, Michel Kichka leading classes at Bezalel Academy, Henri Kichka talking about his experiences in the concentration camp – in a recording made during his visit to a secondary school at Tournai and a drawing performance by Michel Kichka at MOCAK. The recordings are intended to provide the basis of a documentary made as a German and Polish co-production and planned for 2018.

The exhibition has been prepared in collaboration between the Center for Persecuted Arts in Art Museum in Solingen, MOCAK the Museum of Contemporary Art in Krakow and the Polish Institute in Düsseldorf. Part-funded by: NRW KULTURsekretariat.

Michel Kichka Second Generation: What I Did Not Tell My Father
Wszystkie prawa zastrzeżone © MOCAK 2011-2021