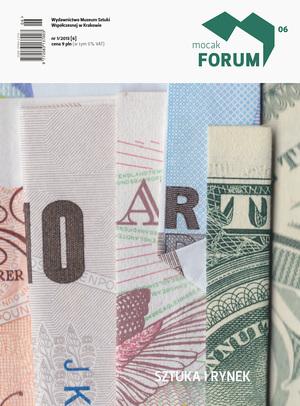 Introduction
Art and Market – Katarzyna Zalasińska
Art and Market
Global Art Market – Izabela Nowak
Well-known or Unknown, or the International Reception of Polish Photography – Agata Ubysz
Art from the Money Perspective – Janusz Miliszkiewicz
Museums Tied Up in the Art Market – Katarzyna Zalasińska
Investing in Art. Facts and Myths – Grzegorz Goleń
Interviews
This Will Not be a Conversation About Money – Paulina Olszewska discusses the presentation of Polish art abroad with Monika Branicka, co-founder of the Żak Branicka Gallery
It’s all Matejko’s Fault What is the difference between a collection and an assortment and why post-modernity is a waste heap: Łukasz Gazur talks with Professor Jerzy Stelmach
How Much Experiment Can There Be A reprint of an interview with Edgar Bąk from A Billion Things Around. Agata Szydłowska Talks With Polish Graphic Designers (Karakter Publishing House)
Visual essay
Art Bazaar – Anna Orłowska and Mateusz Choróbski
Texts
Time for the Young – Katarzyna Wąs
Money doesn’t work – Katarzyna Wincenciak
Artcoaching – What Is It All About? – Aga Kozak
The Prada Marfa Project – Bartosz Haduch and Michał Haduch
Column
At the Periphery of Art – Maria Wierzchoś
Edulab
Let’s Talk Education, Let’s Talk Art – Elżbieta Sala, MOCAK education department manager, talks with Agata Tecl, a Kronika educator from Bytom
The Economics of Colour – Kinga Lubowiecka
A Bookful of Benefits – Oliwia Brzeźniak
Reviews
Art of the Deal – Maciej Gajewski
At MOCAK
Direction: Art! – Elżbieta Sala

In France, the notion of ‘collecting’ belongs to the domain of psychiatry. It refers to a kind of compulsion or obsession that goes beyond the ordinary instincts of possession. However, it is thanks to such quirks that we can now admire some outstanding collections from the past, offering an impressive testimony to the excellence of human endeavour. Had it not been for collectors, the first museums would not have been established, while the contemporary ones would not be able to grow. In this new issue of the ‘MOCAK Forum’ we decided to analyse the state of Polish art market, and therefore also the collecting activity of museums and individuals. In order to do so, we had to outline the specific nature of this market both from domestic and international perspectives. We focused in particular on the Polish photography market and indicated the position and role of museums in art trade, explaining the gist of art investment mechanisms.

The market is an important force that drives the development of collecting. Just as much as museums and galleries, antique dealers, art dealers and auction houses should also promote art and shape the need for possessing beautiful, moving, exceptional objects. Although it may seem that the current situation favours the professionalisation and growth of the art market in Poland thanks to the easier processes of exchanging goods, liberalising art export law, growing wealth and generational change, our market still struggles for identity, sometimes even survival. More and more often, we are confronted with a question: How do we stimulate the art market to finally embark on the path of dynamic growth after over 20 years of its existence?

In the preface to his 1933 book describing the most valuable collections of the National Museum in Krakow, Feliks Kopera wrote that ‘the culture and power of nations is measured by its museums’. Assuming that museums, market and collectors intertwine in a system of interdependence, we also need to understand that all of this happens in one, common area of culture. Market is not only money. It should play a crucial role in promoting Polish art both within the country and outside its borders, which makes it a vital tool of foreign policy. The position of Polish art abroad shapes the way in which our country is perceived as a member of the international community. Apart from some galleries, the activity of market entities is usually limited to promoting the idea of investing in art, not collecting it. Meanwhile, buying art just for the sake of potential financial profit is the ultimate way of isolating the market from two other areas for which it is responsible, namely museums and private collections. It also deprives art of its basic value: the ability to nurture and promote people’s self development.

Katarzyna Zalasińska
The Editor of the issue