Viennese Actionism: The Opposite Pole of Society Works from The Essl Collection (Austria)

This is the first comprehensive Polish publication about Viennese Actionism. The catalogue consists of a number of sections. It presents reproductions of works by Günter Brus, Otto Muehl, Hermann Nitsch and Rudolf Schwarzkogler as well as a sizeable selection of their writings, such as manifestos and accounts of actions. It also contains critical essays by Actionism specialists.

We cannot find much information about the Vienna Actionists in the Polish art literature. This publication is the first extensive encounter with their texts and documentation of their work in the Polish language. After the introductions that open the book and curator's text there follows a selection of the more important theoretical texts, manifestos, and essays by the four Vienna Actionists, as well as press accounts from their actions and interviews about Viennese Actionism from a later perspective (conversations with Otto Muehl and Hermann Nitsch). Particularly deserving of attention are the Selected Theoretical Texts of Rudolf Schwarzkogler, none of which appeared during the artist’s lifetime. The next part contains a collection of texts about Viennese Actionism and the contexts in which this art came into being. An introduction to the connections between art and politics in Austria over the twentieth century is provided by Andreas Stadler’s essay Disturbing Art and Politics in Austria. In Remarks on the Subject of Viennese Actionism, Its Antecedents and Successors, and the Environment, Hanno Millesi describes the historical development of art and the attitudes of Brus, Muehl, Nitsch, and Schwarzkogler while tracing their influence on other artists. In her text The Rape of Culture Maria Anna Potocka presents the Actionists against the background of the Zeitgeist of the sixties as a vital phenomenon paradoxically selected by society to break down the received shell of prevailing social relations. Gerld Raunig, in turn, performs a critical analysis of the political involvement of Actionism in 1968 and the real-world consequences of the alliance between artists and political entities in Art and Revolution 1968: Viennese Actionism and Negative Connection. The final part of the book broadens the issues dealt with in the exhibition. Ewa Majewska writes about the relations between the art of the Vienna Actionist VALIE EXPORT and the social-cultural context and the rise of women’s art (most publications on Actionism lionize the men while overlooking the work of the women in their circles) in The Corporeal Abolition of (the End of) Art in the Work of VALIE EXPORT. Kuba Szreder theorizes on the ambitious but de facto unrealized postulates of the avant-garde – the melding together of life and art – in his essay The Autonomy of Art and Society, in which he mulls over the future possibilities of, but also the threats to, art that is indeed socially engaged. The book closes with a broad choice of documentation and photographs of the work of the Actionists and the later paintings by Brus and Nitsch.

Viennese Actionism: The Opposite Pole of Society 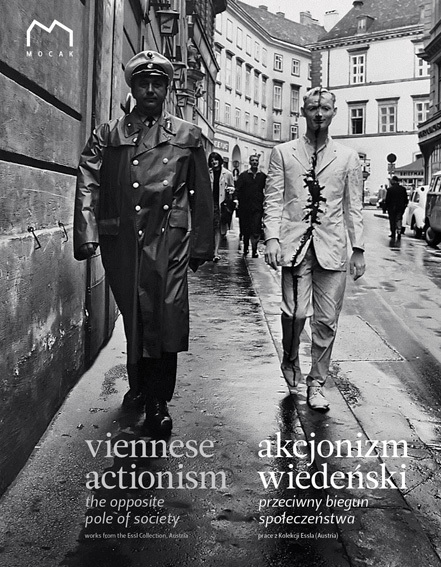 Catalogue has been published to accompany the exhibition:
Viennese Actionism: The Opposite Pole of Society
Works from The Essl Collection, Austria
Museum of Contemporary Art in Krakow
9 November 2011–29 January 2012
curator: Stanisław Ruksza
coordinator: Delfina Piekarska