//Tuesdays with the Collection//: Azorro

Tuesdays with the Collection: Azorro

The March edition of the project Tuesdays with the Collection is devoted to 4 video works by the group Azorro, made in 2001–2002: Bardzo nam się podoba (We Really Like), Portret z kuratorem (Portrait with a Curator), Czy artyście wolno wszystko?, (Is the Artist Allowed Everything?), Koniec sztuki (The End of Art).

We Really Like is Azorro’s first flim, which set out the strategy and character of their subsequent works. The members of the group visit a number of Warsaw’s art galleries and comment on the exhibitions. Their comments boil down to ‘liking’ the works, which is expressed in a variety of works. This is an ironic comment on the language of art criticism.

Portrait with a Curator is a record of Azorro’s activities during exhibition openings, when artists take snaps of themselves in the proximity of curators and critics. With this gesture, Azorro mock artist’s dependence on curators.

In the video Is the Artist Allowed Everything? the members of Azorro has stepped over the line of acceptable behaviour, which, however, is more reminiscent of little boys’ pranks than provoking artistic acts. The film mocks the fetishisation of the auteur artist whilst at the same time questioning the point and objective of employing shock as an artistic technique.

In The End of Art, Azorro manifest their contempt for the opinions and judgements expressed by critics.

The art group Azorro was founded in 2001 by Oskar  Dawicki (b. 1971), Igor Krenz (b. 1959), Wojciech Niedzielko (b. 1959) and  Łukasz Skąpski (b. 1958). The group has never formally dissolved, although in 2010 they produced their Last Film. With their stance, the artists manifest their opposition to pathos. They oppose critical art and mock the pompousness of the art world. 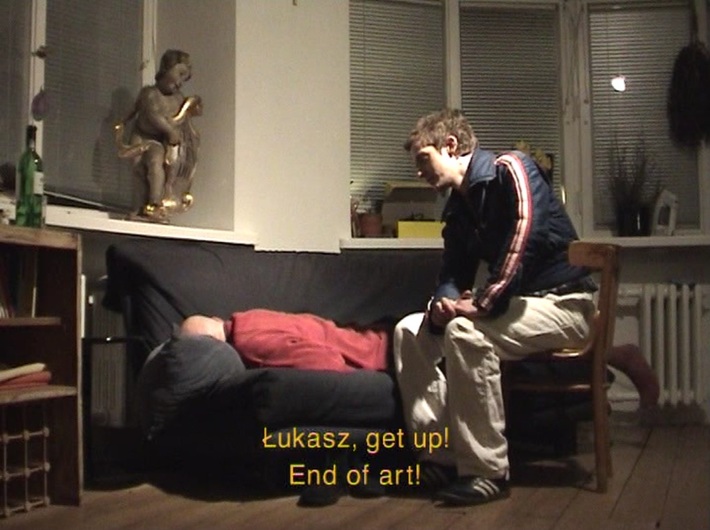 Co-financed from the funds of the Minister of Culture and National Heritage.