//The Tactics of Barbara Hammer// – a retrospective of films by the pioneer of experimental queer cinema, with an opportunity to meet the artist

The Tactics of Barbara Hammer – a retrospective of films by the pioneer of experimental queer cinema, with an opportunity to meet the artist

Jointly with the American Studies Center of the University of Warsaw and the Ujazdowski Palace Centre for Contemporary Art in Warsaw we would like to invite you to the retrospective of the pioneer of experimental queer cinema Barbara Hammer and to meet the artist.

The retrospective of the artist’s selected films will take place on 10 October 2016 at 6 pm, with an introduction by the film pundit Adrian D. Kowalski, followed by the screening of the following films: Dekactics, Menses, Double Strength, Pools, Synch Touch, Sanctus, A Horse Is Not a Metaphor, Maya Deren’s Sink, Dr Watson’s X-Rays. Meet Barbara Hammer on 11 October 2016 at 6 pm. The event will be hosted by Andrzej Pitrus from the Institute of Audiovisual Arts of the Jagiellonian University.

During the retrospective, The Tactics of Barbara Hammer (10 – 18 October), the director will visit Krakow, Warsaw and Łódź, presenting her works and talking about them to the viewers at MOCAK the Museum of Contemporary Art in Krakow, CSW Zamek Ujazdowski in Warsaw and Art Museum in Łódź.

Hammer is considered a pioneer of queer cinema and she is a significant presence in the independent cinema. Born and bred in Hollywood, the cradle of commercial cinema, she has been one of the most defiant and uncompromising artists to have developed the language of experimental cinema consistently throughout her career. Her films have been shown at film festivals since the 1960s (having been twice awarded the Teddy Award at the Berlinale), and alongside her films, her collages and drawings have been part of her retrospectives in such venues as the Centre Georges Pompidou,MoMA in  New York Tate Modern in London. She has received a grant from the Guggenheim Foundation and for many years has been a film lecturer in the USA and Europe.

Hammer’s early films focus on such taboo topics as menstruation, female orgasm and lesbian sexual relations. Dyketactics, a film from 1974, is considered the first-ever screen image of lesbian sex, which has earned the work a place in the history of the cinema, side by side with the ground-breaking films by Jack Smith and Andy Warhol as well as the, ideologically distant, Gerard Damiano’s Deep Throat (1972) and Boys in the Sand (1971) – films that introduced a new way of portraying sex on the big screen. Subsequent works such as Multiple Orgasm, Whomen I Love, Sync Touch or Doll House, which daringly – often through self-presentation – portray female sexuality, have put Hammer’s oeuvre on the map of the American radical feminism of the 1970s. From the very beginning, Hammer paid special attention to formal aspects and experimented with 16 mm tape. In turn, her documentary films – depicting the stories of people marginalised by public opinion – are multi-layered film essays which intend to engage the viewers physically and mentally as well as inspire them to make social change. Hammer’s films have repeatedly caused controversy among the audiences who criticised the overly bold representation of human physicality, old age, or intimacy. The subject of her short films ensured her celebrity status and made her a cult figure in LGBT communities; her original formal experiments made Hammer a fixed part of the history of independent film.

Barbara Hammer repeatedly emphasises the phenomenon of double marginalisation, which she experienced as an artist: lesbians do not watch experimental cinema, preferring the more traditional forms of narration, whereas the experimental cinema audiences and filmmakers are not interested in LGBT or feminist topics, looking for more universal films. The retrospective, which is planned in Warsaw, Łódź, and Kraków, intends to fill this gap and to introduce the work of Barbara Hammer in the appropriately broad context of the history of American cinema and independent film, as well as to interest the pundits on LGBT representation in art and culture. In Warsaw, the works will be presented using the original media, including 16 mm film, allowing for the full appreciation of Hammer’s experiments. 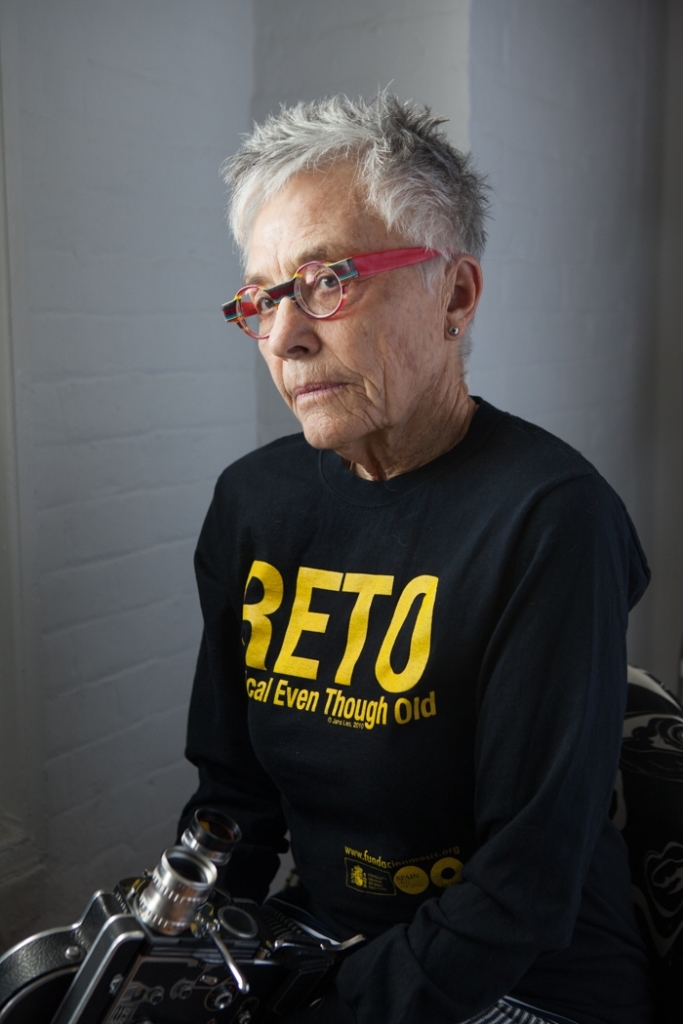 The artist will visit all the cities where her works are screened so as to meet the audience at selected screenings (the event in Łódź will be hosted by Monika Talarczyk-Gubała, in Krakow by Professor Andrzej Pitrus, and in Warsaw by Krystyna Mazur). The retrospective will be followed by Barbara Hammer's seminar, The Hidden Hammer, an open debate on queer experimental cinema, and the publication of a collection tentatively entitled Other Cinema: The Feminism of American Queer Film, an anthology, edited and with an introduction by Krystyna Mazur. The book will be published next year and will include both translations of academic texts already published abroad, as well as new essays by Polish researchers.

Barbara Hammer (b. 1939) – American experimental film director, professor at the European Graduate School in Saas-Fee (Switzerland). She is especially noted for her numerous experimental films that take on board such themes as gender roles, lesbian relationships and family issues. In the course of her four-decade career, she has completed over 80 projects. Acknowledged as a pioneer of queer cinema.

Andrzej Pitrus – professor at the Institute of Audiovisual Arts at the Jagiellonian University. He specialises in the new media and their application in contemporary arts, occasionally reverting to his original interest in the cinema, focused on the experimental and artistic. The author of some dozen limited edition books on the cinema, media and video games. In December 15 Wydawnictwo UJ published his book on the art of the American master of video art Zanurzony. O sztuce Billa Violi.

Adrian D. Kowalski – cinema expert, co-ordinator of projects accompanying exhibitions at MOCAK. Interested in the links between Virginia Woolf and visual arts as well as the history and theory of film music. His texts have appeared in periodicals including Dekada Literacka, Maska, Studia Orientalne, Muzyka, Polisemia i Zeszyty Naukowe UJ.