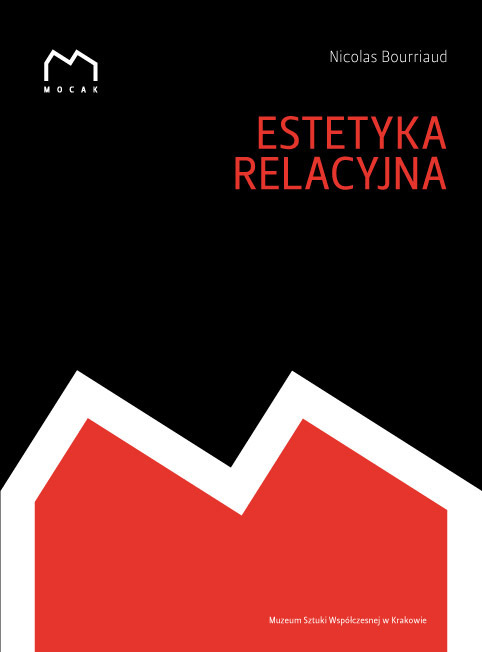 On Thursday 19 January at 6 pm, join the discussion about Nicolas Bourriaud’s Relational Aesthetics, published by MOCAK. Session organised by MOCAK together with the Księgarnia Pod Globusem bookshop at 1 ul. Długa.

The translator of the publication Łukasz Białkowski will be talking to Jan Sowa about Bourriaud’s concept. Led by: Tomasz Kaszubski, the manager of the MOCAK Library.

You can buy the book at the event. It is also available from the MOCAK Bookstore and online on Allegro, as well as from all good bookshops, museums and galleries.

Nicolas Bourriaud uses his concept to interpret the art of the 1990s, which did not centre around objects, but focused instead on interpersonal relationships. In this way it was meant to counteract the objectivisation of the individual in neo-liberal society. In the introduction to the Polish edition, the author responds to the criticism of Relational Aesthetics, which accused it of being utopian and apolitical.

‘The mobile phone, one’s clothes, but also the final credits of TV programmes or companies’ logos all trigger certain forms of behaviour and promote values which emphasise the role of the community and which are linked to certain ways of viewing the world. It is the role of the artist to subjugate these forms, re-code them and to create an alternative narrative. Let’s repeat, that art can be defined as an alternative production line for buildings such narratives. Art evades all definitions, but it performs a specific function, which enables it to assemble into a whole elements which are far apart from one another.’
From: Nicolas Bourriaud, Relational Aesthetics