//Quotes from the Collection//. Jerzy Kosałka

Quotes from the Collection. Jerzy Kosałka

Quotes from the Collection is an all-year project at the MOCAK Library that will provide a framework for the presentation and discussion of selected works from the MOCAK Collection. The project will not only enable the viewers to familiarise themselves with works that are not at present part of the Collection exhibition but also provide an incentive for a leisurely, in-depth study of the creativity of selected artists. In July we will present the work of Jerzy Kosałka, entitled Map of the Battle of Kłobuck.

The Map of the Battle of Kłobuck was made for a magazine published by the Legendary Luxus Group. The periodical consisted of original artists’ pages, hand-made and duplicated in thirty copies. In 1986, we thought up the motto ‘Luxus invites you to go to war,’ and I decided to portray our internal Polish war, which had then appeared so forcefully in the country with the dividing line between ‘us’ and ‘them’ running not only along the boundaries of political parties, but also, frequently, down the middle of the family table. I decided to paint chaos. I wanted to make a new version of a battle, using Pollock’s tachist method but employing only two colours. Spattering paint on white paper spread on the floor, I was continually dissatisfied with the effect, and so I decided to look at my work from a distance and hung it on the wall. e effect was horrible, but then I looked at the floor where I had spread out wrapping paper for protection. By chance, the printed side was facing up. e paint that had splashed beyond the paper that I removed made a frame for the picture, which turned out to be an ideal representation of my battle, and all I needed was to add inscriptions. At that time, paper with this design was the only kind of wrapping paper that existed on the Polish market, and it was used to line the shelves in wardrobes and cupboards, and to cover school notebooks. As for the title, I appropriated for my use the name ‘Kłobuck’, since it seemed to me that in itself it was humorous from the phonetic point of view, and besides that it contained elements from the sounds of thenames of other battles: Kursk, Kock, Płowce – and it the idea worked. e ubiquity of that paper and the wild popularity of the Map inspired me next to compose a mini-manifesto entitled Do It Yourself, Or a Work of Art in Every Home. In the manifesto I renounced my own copyright of the idea, and, as a result, people made their own versions of The Map of the Battle of Kłobuck and gave them to me to sign, but in various homes I also came across these works signed ‘after Kosałka.’ A most surprising thing for me about this work is the fact that it has remained relevant the whole time. When it came into being in 1986, the division of Polish society into ‘us’ and ‘them’ was extremely sharp, but it seemed like something that would pass: an internal war over the system was going on. After twenty-five years of transformation, the problem has not only failed to cease being relevant, but it has been exacerbated. Wrapping paper with this pattern disappeared from the shops in 1989 because it lost out to computer designed coloured paper, but ‘they’ still exist, and there are even more of them. ‘We’ are also holding on pretty tight, and we are surely not going to surrender to them. Jerzy Kosałka

(the text was originally published in the catalogue of the exhibition History in Art, MOCAK, 2011)

Object, installation, action in public space, performance. Kosałka was a member of the Luxus group. He raises issues connected with Polish-German relations, history and local mythology. He is also interested in the image of the war in the media and mass culture. His work is characterised by a large component of humour, irony and self-referring irony. 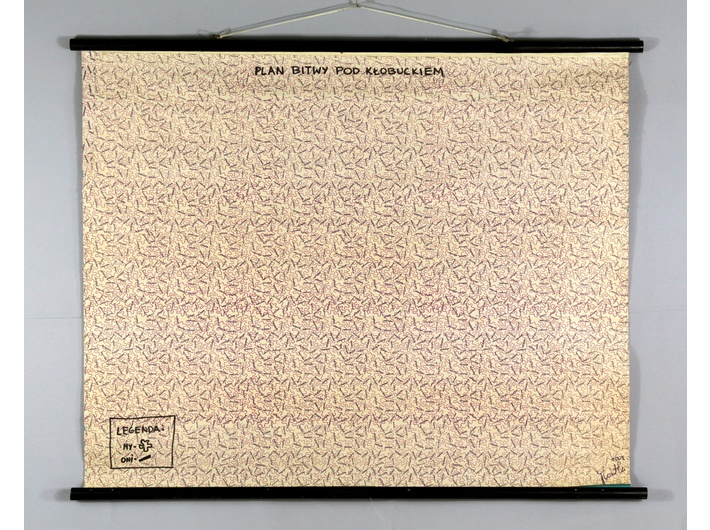