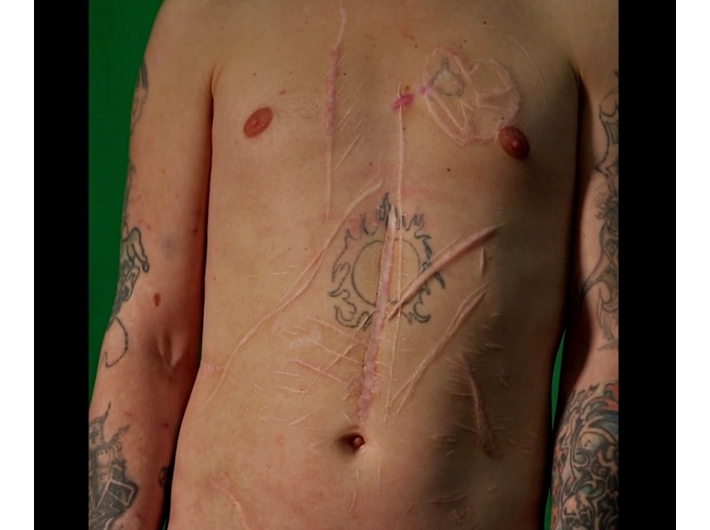 The official opening with the artist will be on Thursday, 4th May at 6:30 pm.

The conceptual artist and political activist Petr Pavlensky represents a new wave of protest and dissident art in Russia. With groups like Pussy Riot and Voina (War) these artists use strong measures through their bodies in performances and actions to combat government oppression and dictatorship. Uncompromisingly and with civil disobedience they create situations that radically challenge the state´s mentality and its system.

The exhibition Anonymous Nationalist recounts an episode from real life where a murder was committed in a civilian setting, but with militaristic intentions. We see the torso of a young man whose naked body bare witness of severe violence, and hear his voice recalling the fatal event in an explicit language. His story crystallizes the essence of nationalist ideology without exculpatory national liberal theories or other distracting decorative aesthetic superstructures.

KNIPSU is an artist-run initiative in Bergen, Norway that operates as a local art space and a mobile arena, producing exhibitions, events, screenings, concerts, workshops and publications. KNIPSU set out to provide an interdisciplinary meeting point for creative exchange and dialogue between artists across national borders. It is run within the framework of collaboration and DIY by artists Hilde Jørgensen and Maya Økland since August 2010. KNIPSU is generously supported by the Norwegian Arts Council and Bergen City.

The project financed by a grant from Iceland, Lichtenstein and Norway through the EEA Grants and by the Polish funds