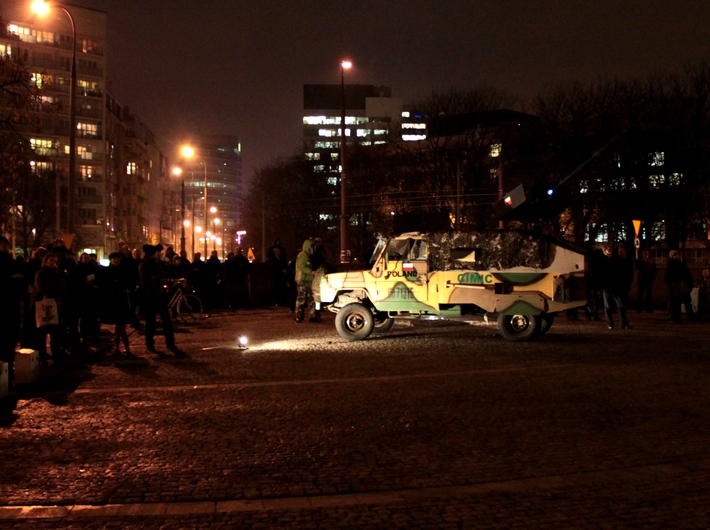 On 23 July at 9.30 pm, you are invited to the Main Square Rynek in Krakow for the special screening of Krzysztof Wodiczko’s The War Veteran Projection from the MOCAK Collection.

A military vehicle equipped with a projector will be placed next to the Town Hall Tower. The public will have an opportunity to take part in a text-and-sound show including statements by Polish Afghanistan and Iraq war veterans and their wives, against the background of sounds of war.

The event will accompany the World Aesthetics Congress taking place in Krakow from 21 to 27 July 2013.

Should it rain on the day, the projection will be postponed to 24 July.

Krzysztof Wodiczko (b. 1943) lives and works in New York and Warsaw. From 1962 until 1968, he studied at the Academy of Fine Arts in Warsaw. During 2002–2010 he served as Professor at the MIT, where he was also director of the Center for Advanced Visual Studies. He is currently Professor in Residence of Art, Design and the Public Domain at the Harvard Graduate School of Design. He has made numerous works in public space dealing with social and political issues such as homelessness, emigration, and war. His projections raise the most painful problems in local society.