On Thursday 17 May at 6 pm you are invited to a special screening with a talk by Krzysztof Kamil Kamiński. Free entry. Limited places. With English subtitles.

Ai Weiwei – the most powerful artist in the world, according to the Art Review – is also the best-known contemporary Chinese artist and an uncompromising critic of his country. In April 2011, Ai Weiwei was arrested and spent three months behind the bars of a police cell. He became internationally famous thanks to his participation as the artist consultant in the design for the acclaimed Bird’s Nest Stadium in Bejing, designed for the 2008 summer Olympics, and then through his boycotte of the opening of the Games – which he called ‘the Party propaganda’ in protest against the autocracy and lack of freedom in China. Faced with strict censorshop, Ai Weiwei mastered the medium of the internet. His witty blog and tweets are not only informational and inspirational for his fans but have also motivated millions of the Chinese to act. And Ai Weiwei’s art – sculpture, installation, photograpy, performance, architecture and video – continues to gain global acclaim. 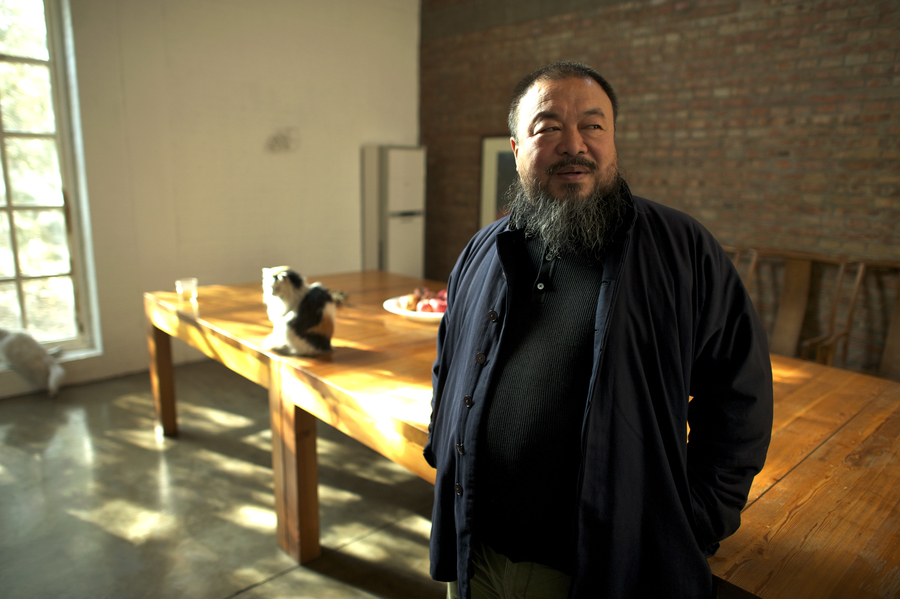 Alison Klayman worked as a journalist in Beijing, where she gained a unique access to the charismatic artist as well as his family and circle of friends. During the work on the film, Ai Weiwei’s blog has closed down by the Chinese government. The artist was brutally beaten and imprisoned in a secret location. Simultaneously, Ai Weiwei was named as the Runner-Up Man of the Year 2011 by the Time magazine. Ai Weiwei: Never Sorry, Alison Klayman’s director debut, tells the story of a passionate dissident of the digital era, who has inspired the world audience and blurred the division line between art and politics.

In the MOCAK Collection, we have Ai Weiwei’s installation Oil Spills. The artist-cum-social activist opposes mass production, testing the boundary between a serially produced object and a unique artecraft. He also considers an act of destruction as a valid creative act. In in actions carried out in public spaces, he comments on the abuse of human rights and democratic standards.

Alison Klayman – independent journalist and documentalist. She lived in China during 2006–2010, where she worked on radio and TV productions including PBS Frontline, National Public Radio, AP Television and others. Her debut feature on Ai Weiwei received a US Documentary Special Jury Prize for Spirit of Defiance at the Sundance Film Festival in 2012. When in the spring of 2012, Ai Weiwei was arrested by the Chinese authorities, Klayman repeatedly appeared in the media in support of the artist and his work.

Krzysztof Kamil Kamiński – graduate of the Faculty of Arts at the Pedagogical University in Krakow in the Graphics Department. Since 2014, a PhD undergraduate at the institution. He holds a post at the Promotions Department in MOCAK.