//A Return Visit. Dali at the Pendereckis// | Warsaw

Marian Eile A Return Visit. Dali at the Pendereckis | Warsaw 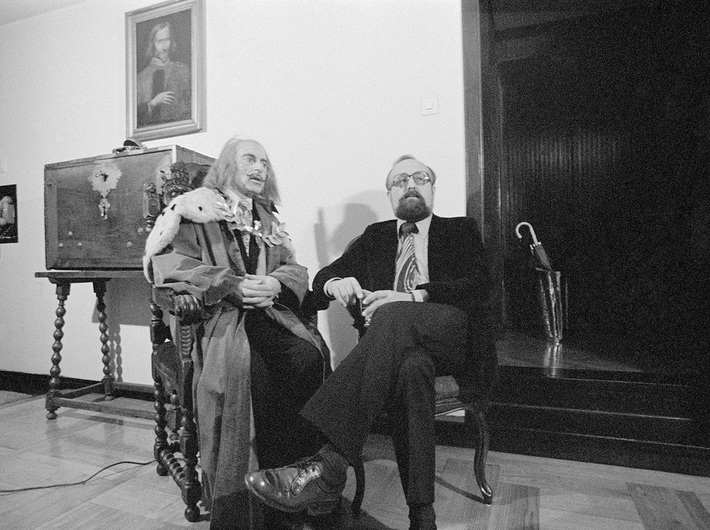 In the mid-1970s, Marian Eile made a series of photographic works. These mostly involved narratives consisting of pre-arranged scenes. Apart from a ‘serial’ about the Pendereckis, two other large series were The Ambush at the Ball and Historic Tableaux. These photo-tales are light-hearted, witty and at times absurd – Marian Eile’s three favourite characteristics, that he valued the most and put to most ingenious use. Behind this photographic literature, there lie quietly small truths about the larger-than-life people who were Eile’s friends.

The sessions with the participation of Elżbieta and Krzysztof Penderecki were shot in their home in Krakow. Włodzimierz Mancewicz played Salvador Dali, with Anna Arvay as his wife; she also took the shots. A few dozen series were made. Some of them – with amusing commentaries – were published in the satirical magazine Szpilki.

Marian Eile’s archive, passed on to MOCAK, contains photographic series based on Eile’s ideas created by the photographers Bogumił Opioła and Anna Arvay for Szpilki, as well as his drawings, projects and archival magazines. The collection was handed over by Anna Arvay and Monika Opioła-Szargut in the first half of 2013.  It comprises negatives of 50 photographic series, 41 prints, 23 drawings, projects and documentation of Eile’s works as well as 214 magazine copies. The exhibition A Return Visit – Dali at the Pendereckis has been organised to celebrate the composer’s 80th birthday. The exhibition at the Krakow Philharmonic will be open to concert audiences, and the exhibition at the Opera Gallery in Warsaw will be open to all.

Marian Eile (1910–1984) – a journalist, satirist, painter and stage designer. In 1934, he graduated in law at the University of Warsaw. He also studied painting in Arnold Szyfman’s studio at the Teatr Polski. From 1935, he worked as a journalist and graphic artist for Wiadomości Literackie, where he had a column called Konkursy pana Grypsa [Mr Gryps’s Competitions], in which he combined drawing and photomontage with witty puns based on word associations. During the war, he worked as a stage designer at the Teatr Miniatur in Lviv and as a road worker in Radom. In 1945, he became the editor-in-chief of Przekrój and remained in that post until 1968. Under his guidance, the weekly magazine became one of the leading media to promote culture and style in Poland and in the countries of the communist block. As a protest against the Government’s anti-semitic policies, he emigrated to Paris in 1968, where he worked for the daily France-Soir, in which he published a daily satirical cartoon as a commentary on current affairs.

In the autumn of 1970, he came back to Poland and embarked on collaboration with the magazine Szpilki, in which from 1972 until 1979 he ran a column Franciszek i inni [Francis and others]. He also worked as a French translator and a stage designer, while continuing to develop his own painting and other forms of art.