In March 2010 Maria Anna Potocka conducted an interview with Wilhelm Brasse. The outcome is the book with edited tales of the prisoner-cum-chief-photographer of Auschwitz, together with a film with fragments of the interview. There is an introduction by the historian Teresa Wontor-Cichy from the Auschwitz-Birkenau State Museum, the academic editor. The book is generously illustrated with photographs from Wilhelm Brasse’s own archives, as well as the Photographic Archives of the Auschwitz-Birkenau Museum and Yad Vashem.

Wilhelm Brasse was born in 1917 in Żywiec of an Austrian father and a Polish mother. Before the war he worked in a photographic studio in Katowice. For refusal to join the Wehrmacht, he was sent to Auschwitz, where from 1941 to 1945 he worked in the Recognition Service as a photographer. He took tens of thousands of photographs of prisoners, hundreds of portraits of SS-men and documented some so-called medical experiments. After the war ended, he returned to Żywiec where he has been living to this day.

‘During the shooting sessions for the SS-men, young German girls from the Funkstelle would often also arrive. They worked in Auschwitz for the SS as support staff as telephone operators or as telegraph ‘sparks’ in the local head office. The girls would come after work because – as young girls do – they wanted their pictures taken for posterity. They were barely twenty and they had uniforms in the same colour as the SS uniforms. Their uniforms were made from the same material and they consisted of a jacket and a skirt. All the girls were always well groomed and I fancied them a lot. One in particular I remember vividly. She came wearing the regulation uniform – jacket and skirt – and asked me to take a really good picture, she explicitly gave me to understand that I had to make a really special effort. She was about 23, blond, pretty and with an elaborate hairstyle. This girl talked to me a litle. She wanted the picture sent to her mother and she wanted a shot called a half bust. She showed almost all her bust, she almost exposed her breasts for the photograph. After a few days, she collected the photograph that she liked very much. And because I really fancied her as a girl, as a woman, so – even though I was a prisoner and she was in uniform – I exchanged a few words with her. About a couple of weeks later I asked after her of some fellow prisoners who worked near the telephone operators’ room and near the telegraph centre. Those offices were in a one-storey building just next to the crematorium. On the ground floor there was a hospital for the SS, and upstairs, the telephone operating centre. They knew who I meant as soon as I asked. ‘Ah, you mean that pretty one. She is dead.’ It turned out that she had committed suicide. She poisoned herself because she could not put up with the situation in the camp. Every day, from the upstairs window, she could see what was going on around the crematorium. She saw crowds of people entering the crematorium, masses of Jews, and later nobody would come out again, all you could see was smoke. So she had worked out what was going on there, she couldn’t take it and she killed herself. And she was so young and so pretty.’* 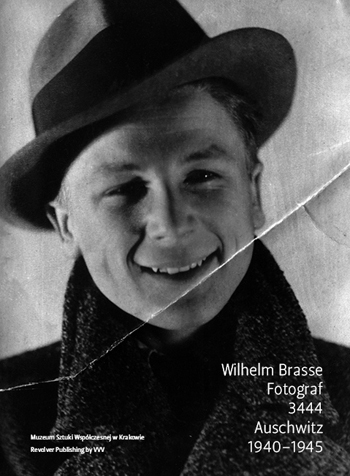 Publication is accompanied by a 43-minute film.

The publication is produced by MOCAK in collaboration with the publishing firm Revolver VVV.

Subsidized by The Ministry of Culture and National Heritage.

Published with financial support from the Foundation for German-Polish Cooperation