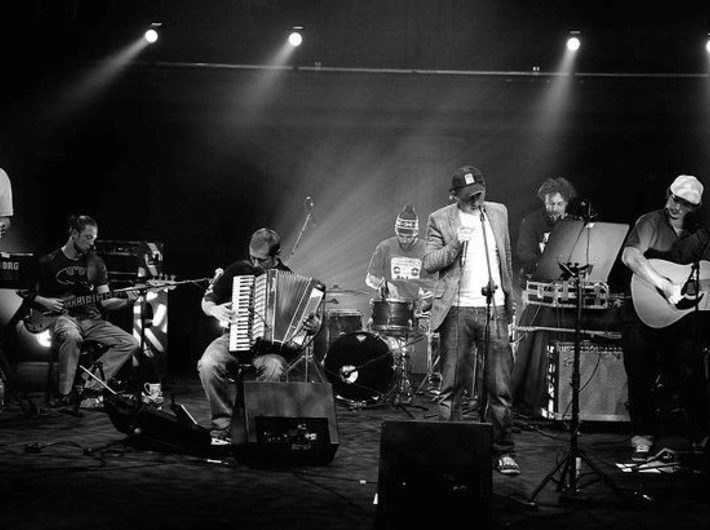 Don’t forget that today is the first day of Ryszard Krynicki’s jubilee festival RK’70. The event, inaugurated with a discussion panel attended by the artist, will end with a concert of the Pablopavo i Ludziki band. The group has published two critically acclaimed albums: ‘Telehon’ and ‘10 piosenek’. What does Marcin Baran, RK’70 programming director, think about their music?

Wikipedia says that Pablopavo is a ‘Polish reggae and raggamuffin singer, one of the first to sing ragamuffin in Polish. He specialises in very long, complicated, freestyle-based vocal parts’. It might even be true.

His publisher says that ‘The leader and the other musicians move smoothly between hip hop and dubstep, funk and psychedelic rock, and every time find musical landscapes that have yet to be named’. This also might be true.

Marcin Świetlicki, when talking about Pablopavo, says that ‘We’ve finally found someone who creates smart and thoughtful rhymes, has a good voice and juicy music. Enough with the con men, the not-so-smart morons, now that we’ve got Pablopavo, the world will be different’. And yes, this also might be true.

Pablopavo himself, in an interview published in ‘PikUp!’, says, ‘I don’t have any special demands, just bread, cheese, some vegetables, books and LPs’. And there is no reason to doubt that whatsoever.

In other words, we would like to invite you to join us at the concert of an intense, talented and modest musician with a great sense of humour.

Apart from the group’s own songs, the music played by Pablopavo i Ludziki will also illustrate Ryszard Krynicki’s poems, sung by Grzegorz Turnau and melodeclaimed by the poets Marcin Baran, Wojciech Bonowicz and Andrzej Sosnowski.