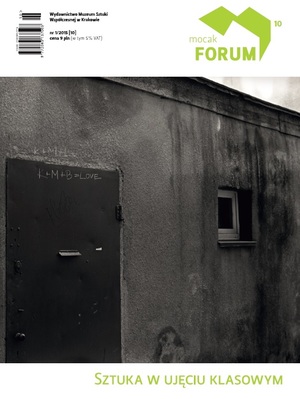 Introduction
Social class as a creative impulse Igor Stokfiszewski
Class Counts
Characteristics of the Upper, Middle, and Peasant Classes in Poland Maciej Gdula, Przemysław Sadura
Class Discourse in the Metropolis Carlos Delclós
Weak Alliance: The Struggle of the Upper and Peasant Class against the Aesthetics of the Middle Class Joanna Erbel
Culture in Action: Linking the Local, the National and the Global Christina Flesher Fominaya
Class Varieties of the Theatrical Taste Maciej Gdula, Przemysław Sadura
To shred. Social costs versus art in Poland Stanisław Ruksza
Cultural Practices of the Working Class
Cultural Institutions and Style(s) of Peasant Class Participation Maciej Gdula, Mikołaj Lewicki, Przemysław Sadura
Appliances from Broniów and Ostałówek About the Former Working Class Łukasz Skąpski
Men of Iron Jaśmina Wójcik
Class struggle in the streets of Łódź Michał Gauza
My Precariat
The Crisis in the Creative Economy and the Movement of the Employees in Art and Culture Jarosław Urbański
Something sensible on my precarity. Arek Parasite talks to Marcin Zalewski
CV of an Unemployed Actress Maria Czykwin
Education
No agreement to ignorance, lack of understanding and lack of possession Elżbieta Sala
Education in Institutions. Maria Prawelska talks to the management of the Arsenał Gallery in Białymstok, CSW Kronika in Bytom, CSW Łaźnia in Gdańsk, Bunkier Sztuki in Krakow, BWA Sokół in Nowy Sącz and BWA in Tarnów
Agnieszka Ziętek talks about the activities carried out by Rewiry, the Studio of Socially Engaged Art, to its creator Szymon Pietrasiewicz
A Timely Notebook Education Supplement: Sława Harasymowicz
Rewiev
Glass Boxing and the Class Struggle Artur Kiela
In MOCAK
Autotautologies Jerzy Treliński talks to Monika Kozioł
Postcard from Israel: New Video Art Katarzyna Pasternak

The 10th issue of MOCAK Forum magazine dedicated to the analysis of art in the social class perspective will soon appear in bookshops across Poland. The editor-in-chief of the issue is Igor Stokfiszewski – a literary critic, playwright, member of Krytyka Polityczna board.

The issue of the magazine is an introduction to the class analysis of society. It guides the reader through the artistic practices that result from the artist’s insight into the nature of the class system and through cultural practices of different social classes, which use them to confirm their self-awareness and at the same time resist social inequalities. The texts featured in this issue refer to such issues as, for example, the description of class system in contemporary societies and the way aesthetics and tastes are conditioned by social class.

Perceiving art as ground for social intervention means turning towards disfavoured groups in order to include them in social circulation. Stanisław Ruksza studies contemporary artists’ activities concerning people who suffer from economic exclusion. Jaśmina Wójcik, who carries out projects with former factory workers, has also contributed to the issue, while Michał Guza writes about restoring the memory of the working class identity of Łódź and about social conflicts. Łukasz Skąpski’s visual essay undertakes a reflection on the cultural practices of peasantry. It shows peculiar farming tools home-made by the inhabitants of impoverished villages of Broniów and Ostałówek. Another issue raised in the magazine is an attempt to start a narrative about the rising social class – the precariat. Jarosław Urbański describes the crisis of creative economy, movements of cultural workers and the economic situation of artists. Maria Czykwin tells the story of her career in CV bezrobotnej aktorki (CV of an unemployed actress), while Arek Pasożyt speaks as an artist “who cannot live off his art.”

The section dedicated to education begins with an essay by Elżbieta Sala and ends with an educational pull-out Notes na czas developed by Sława Harasymowicz. In the section dedicated to MOCAK events the reader will find the interview Monika Kozioł, the magazine’s editor-in-chief, conducted with Jerzy Treliński and Katarzyna Pasternak’s article on new video art from Israel.

MOCAK Forum is MOCAK's editorial project. The magazine's nature is interdisciplinary. Each issue is dedicated to a single topic, which relates to the current exhibitions at the Museum. The magazine features interviews with prominent figures from the world of culture, articles, columns and a visual essay created by an artist. A cover designed by a young artist, an educational supplement and book reviews are regular elements of the magazine. So far, nine issues of MOCAK Forum have been published. The covers were designed by such artists as Michał Zawada, Jan Szewczyk, Kama Sokolnicka, Michał Grochowiak and Konrad Smoleński. Each issue has a circulation of 500 copies. The magazine is distributed in several dozen specialist bookshops all over Poland as well as at Empik chain stores. The editor-in-chief is Monika Kozioł.

Please note that not all text that appeared in the Polish version of the magazine have been published in English.