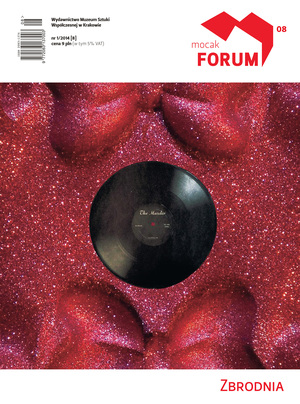 The eighth issue of the "MOCAK Forum" is on sale. The theme of the current issue – drawing on Crime in Art, the exhibition which was presented at the Museum from 16 May until 28 September – is crime in its broadest sense.

The publication leads with a reprint of the acclaimed text by the Italian psychiatrist and criminologist Cesare Lombroso, a pioneer of a comprehensive theory of criminology which held that crime is conditioned by heredity. Matricide and patricide are important threads – including references to the inferred murder of the Cuban artist Ana Mendieta and the mysterious death of Pier Paolo Pasolini – as is the issue of to what extent psychoanalysis is useful in criminology. In the current issue the reader will also find a parody of a detective novel by Gertrude Stein as well as a text written for the Witkacy Stage in Wrocław by pilgrim / majewski, devoted to the post-war fate of … the shoes of Marta Goebbels. The issue closes with a generous interview conducted by Monika Kozioł with Danny Devos – a Belgian artist whose works reference real-life crime.

Please note that not all text that appeared in the Polish version of the magazine have been published in English.