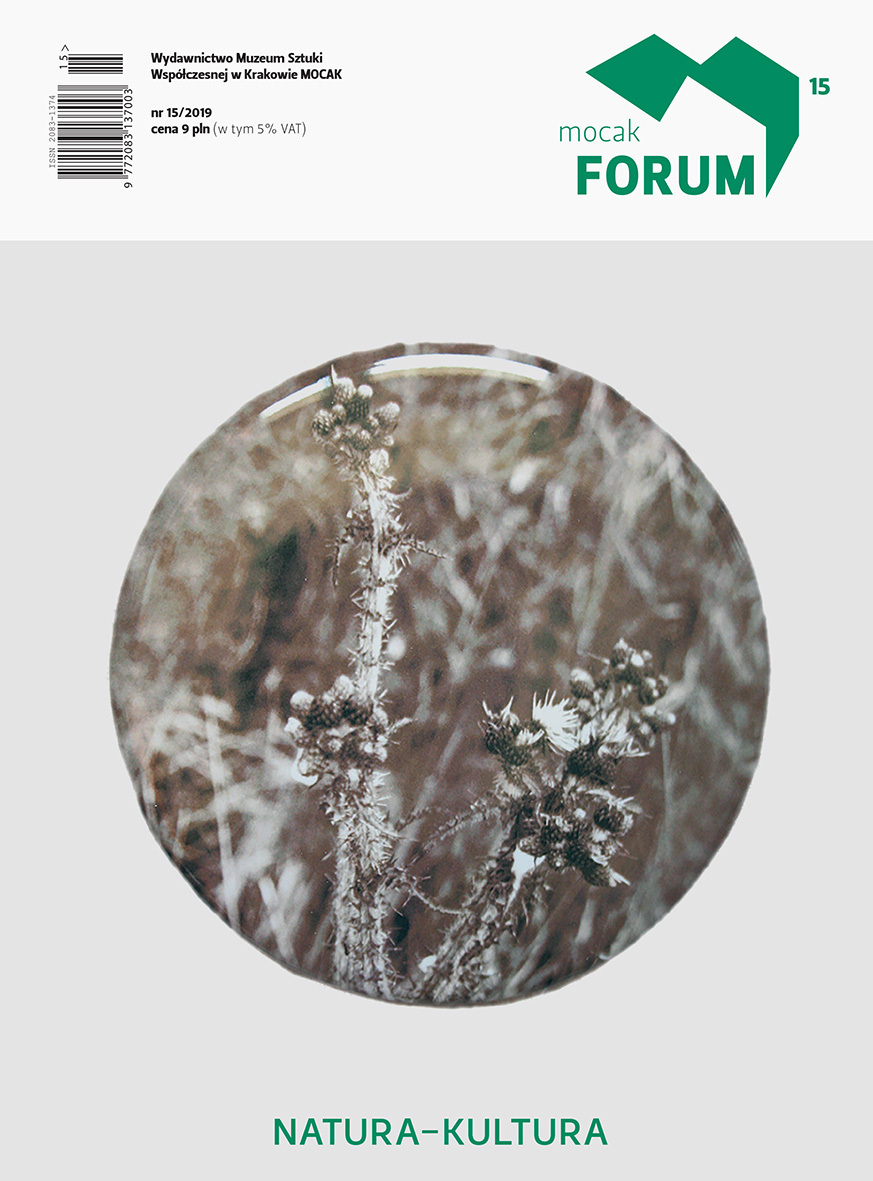 MOCAK Forum issue 15 is themed on the relationship between nature and culture, taking on board the topical reflections on the connectedness and fusion of the two. The magazine is available in Polish.

Its editor-in-chief is Professor Monika Bakke, who writes about the interdependence of nature and culture: ‘Acceptance and respect for this vision of life are now seen as a necessity, indispensable for the life and survival not only of the human species, but of every species. Not only scientists and activists, abut also artists and writers have all spoken out on this issue. In her Nobel Prize speech, Olga Tokarczuk said that she must “tell the story as if the world were a living entity that constantly comes into being before our eyes, and we were a small and powerful part of it.” There are many similar voices and there is a clear demand to abandon an anachronistic anthropocentrism as a vision of the world that dangerously and falsely isolates us from others. Faced with the climate crisis and an increasing environmental devastation, Anna Tsing writes that “without co-operation we will all die”, while emphasising that each species works closely with others in different ways; despite the differences, it creates relationships.’
The thematic part of the MOCAK Forum Yearbook comprises 12 texts by: Kat Austin, Joanna Bednarek, Prudence Gibson and Monica Gagliano, Joanna Jeśman, Rafał Kosewski, Andrzej Marzec, Anna Nacher, Andrzej W. Nowak, Katarzyna Proniewska-Mazurek, Marek Wasilewski, Karolina Żyniewicz (who also contributed the cover).  This part ends with a visual essay by Krzysztof Maniak entitled Blackthorn, which is a record of walking among plants as a natural-cum-cultural practice. The section on education includes a text by Anna Pyzik on educational activities in nature and an interview conducted by Marlena Nikoda with the Syrian poet Kholoud Charaf. The issue closes with interviews with the artists from the MOCAK Collection, Deborah Sengl and Piotr Lutyński.