On Friday, 5th June at 6.30 pm come to professor Paul K. Saint-Amour's lecture dedicated to the relationship between copyright law, art and literature.

Copyright law is commonly associated with artistic work and regulations which specify who and on what terms can use creative works. However, the growing importance of intellectual property in the developed economies means that copyright law is encompassing ever more aspects of reality. Even today it is debated whether genetic code or genetically modified organisms constitute creative works in the light of copyright law. The law itself, on the other hand, seems to be closely related with our understanding of life and the ways of exercising power over it. Paul K. Saint-Amour, a literary scholar and critic of copyright law, associate professor at the University of Pennsylvania, will talk about the relationship between intellectual property and biopolitics, the place of art and literature, as well as provide a reflection on them.

The lecture will be held as part of the international seminar Arts and Literature. Copyrighted organised by the Department of Literary Anthropology and Cultural Studies at the Jagiellonian University and the Centre for Advanced Studies in Humanities, Jagiellonian University from 5th to 6th June 2015. The programme of the seminar >>>

The lecture will be delivered in English. Translation into Polish will be made available to the participants. 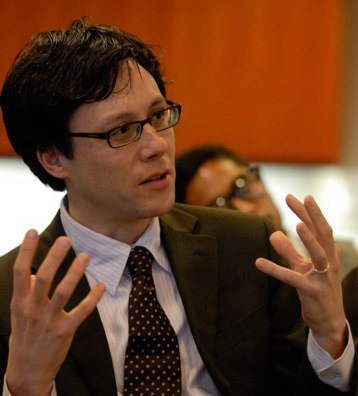 Paul K. Saint-Amour — associate professor of English at the University of Pennsylvania.rof. Satin-Amour works on Victorian and modernist literature, with special interests in theovel, law, trauma, and visual culture studies. Saint-Amour's The Copywrights: Intellectual Property and the Literary Imagination (Cornell UP, 2003) won the MLA Prize for a First Book. His articles have appeared in journals such as "Comparative Literature Studies", "Critical Inquiry", "Diacritics", "Modernism/Modernity", "Nineteenth-Century Studies", "Novel", "Post 45", "Public Books", "Theory, Culture, and Society", and "Representations". A few years ago, Saint-Amour chaired a fact-finding panel initiated by the International James Joyce Foundation (IJJF) to study the permissions history and criteria of the Estate of James Joyce and the general problem of scholarly fair use. Saint-Amour sits on the editorial board of the open-access journal Authorship. From 2012-13 he served as President of the Modernist Studies Association, whose fair use task force he co-chairs with Robert Spoo. He edited the volume Modernism and Copyright (2011) for Oxford UP's Modernist Literature and Culture series and has just completed a book entitled Tense Future: Modernism, Total War, Encyclopedic Form.

The project is organised as a part of the research grant Modern Literature and Copyright Law, financed by the National Science Centre upon a decision number DEC- 2012/05/N/HS2/02796.