Mirosław Bałka's sculpture AUSCHWITZWIELICZKA was created in 2008–2009. The work takes the form of a concrete tunnel 17 metres long, 2.5 metres high, 2.5 metres wide and weighing 17 tonnes. The inscription ‘AUSCHWITZWIELICZKA’ has been cut into the ceiling of the tunnel and is projected onto its walls. As of 2018, the sculpture has been part of the MOCAK Collection.

Mirosław Bałka's work is an ironic reference to Krakow tourist offices offer of combined tours to the Wieliczka Salt Mine and the Auschwitz-Birkenau camp. This combination advertises the service, but is completely devoid of any reflection on the meaning of these places and the memory that belongs to them. Mirosław Bałka chose the form of a tunnel because it is a symbol of passage. However, there is no passage between the two places, because they are different worlds. One does not merge with the other. The irony is highlighted by merging the names of these places into one word. The material used in this sculpture – raw concrete, often appears in this artist’s works.

In September 2009, AUSCHWITZWIELICZKA was unveiled at Niepodległości Square in Podgórze. In August 2010, it was moved to Lipowa Street and placed next to the tunnel of the Krakow Zablocie railway station, in the vicinity of MOCAK and the Krakow Museum. In March 2016, due to the extension of the Krakow-Zabłocie station, the sculpture was deposited on the site belonging to the MPK, courtesy of the company.

In 2023, MOCAK, jointly with the Board of Public Green Spaces and in collaboration with the RE-Bau company, will again exhibit the sculpture in public space. The object will be located near the Kotlarski Bridge, in the area of the extended park of Wisła Station in Zabłocie. 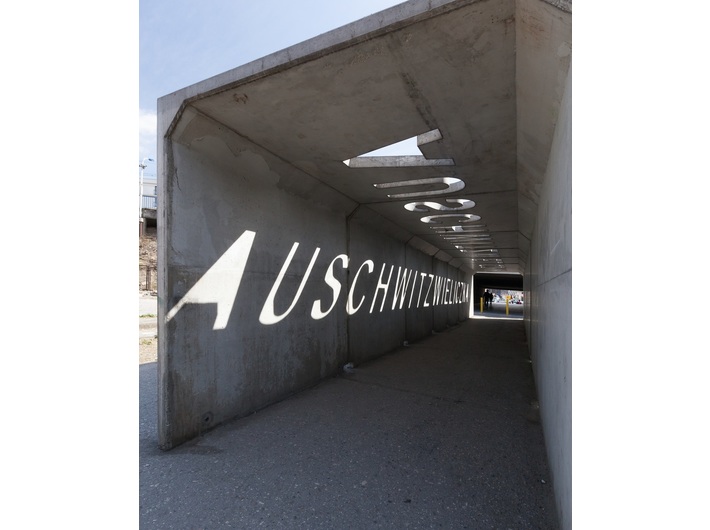