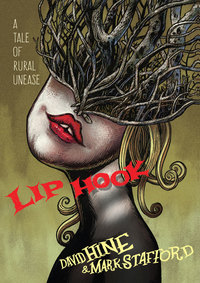 Somewhere in the British Isles, at the end of a neglected byway, lies a village called Lip Hook. For its inhabitants, this place is more than the end of the road – it’s the end of the world. Beyond it, there is nothing but mist-shrouded marshland. Few travellers choose the road to Lip Hook.

Then two fugitives emerge from the fog, seeking refuge at the Hanged Man Inn: a dangerously beautiful woman and a man with a gunshot wound and a suitcase full of treasure. As the disruptive outsiders’ influence grows, a false faith grips the community, returning its followers to ancient ways and resurrecting a secret history perhaps best forgotten.

A dank tale of rural unease from creators David Hine and Mark Stafford, Lip Hookexplores the nature of belief, the responsibilities of power and the tipping point where reason, logic and humanity begin to melt into the murk.