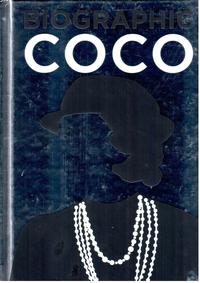 Many people know that Gabrielle ‘Coco’ Chanel (1883-1971) was a prolific French fashion designer and founder of the House of Chanel, who ruled over Parisian haute couture for almost six decades. What, perhaps, they don’t know is that, she was taught to sew by nuns and started Chanel by making hats, that she lived in a suite at the Ritz Hotel, Paris, for 37 years, that, in 1935, she was recognised as the world’s wealthiest woman, and that, prior to her fashion career, she worked as a singer, famously gaining the nickname ‘Coco’ from one of her songs. Biographic: Coco presents a visual catwalk through her life and work, with an array of irresistible facts and figures converted into infographics to reveal the genius behind the garments.