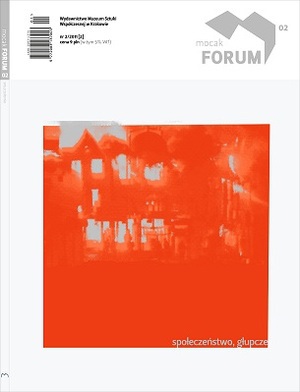 Introduction
it's society, stupid! - Stanisław Ruksza
it's society, stupid
What Is Art For? - Maria Anna Potocka
How Much Actionism Does a Society Need? - Lucien Kayser
Los Indignados at the Puerta del Sol in Madrid - Photo report by Rafał Żwirek
Que No Nos Representan - Notes from the Spanish Revolution - Igor Stokfiszewski
Interviews
Real Ya! Culture - About the 7th Berlin Biennale, Institutional Crisis and Social Movements, Not Only in Madrid Katarzyna Wąs and Sebastian Liszka talk to Artur Żmijewski
Projects That Make a Difference - About What Parkour, History and Art Have in Common Magdalena Mazik talks to Piotr Wysocki
The Wigry World Hub - About Working with a Local Community and the Unequal Battle Between Dialogue and an Experiment with the Monumentality of Walls Julita Kwaśniak talks to Agnieszka Tarasiuk
From a Lack of Faith in the Power of Unrealised Projects to Faith in Visions and the Power of Utopia Dorota Grobelna talks to Joanna Rajkowska
Visual Essay
Piss off! - Rafał Jakubowicz
Texts
Mokotowska Tent City - Karol Sienkiewicz
A City Is Not a Business - Elżbieta Sala
Hortus Conclusus, or… Do You Know What’s Behind the Wall? - Katarzyna Wąs
Essay
Right Wing? Left Wing? - Piotr Kosiewski
Edu Lab
Art Destroyers - Elżbieta Sala
Doodle Cook or 17 Recipes for Making Your Own Art Work - Iwona Wojnarowicz
All That Enchants Us, Moves Us, Shatters... - Elżbieta Sala
Reviews
Overcooked Ideas - Sebastian Liszka
A Controversial Artist from the Vatican - Jaś Kapela
At MOCAK
The Conservator Is Not as Conservative as He Is Painted... - Katarzyna Wincenciak talks to Zofia Kerneder
Art for Sale - Kamila Kowerska

‘It’s the economy, stupid!’ – the slogan echoed by a number of politicians and economists in the 1990s and taken up by the so-called commonsensical, neo-liberal society became the main slogan of the Western world in the past two decades, in pursuit of which, the state took up the role of an active participant in the market. This stance of governments and elites, in the final analysis intent on pursuing nothing but profit, and quite indifferent to the social cost in all dimensions, was additionally boosted by Mrs Thatcher’s 1980 pronouncement, ‘There is no alternative’. In terms of the prevailing Weltanschauung, such a stance completed the dominant elitist philosophy – of enlightened cynicism. Today, when the Indignados’ movement keeps going from strength to strength, it has become clear that society needs new scripts for the future. Art may turn out to be extraordinarily useful in that process. And so we devote the second issue ofMOCAK Forum to the relationships between art and society.

Stanisław Ruksza
The Editor of the issue